This article will help answer any potential questions you might have in regards to the Publisher using InDesign files.

Written by Gabriela Tenze
Updated over a week ago

In regards to designing templates for the Publisher, where do the biggest problems lie? Are there any possible workarounds for existing templates? To simplify the answer, we’ll split Sketch and InDesign up, since the way you create templates will slightly differ depending on which one you’ll use.

Generally, the Publisher is best suited for creating less complex templates, with as little running text as possible. Why? Simply because when applying lengthy text snippets or complex imagery, you could run the risk of creating inconsistencies. Business cards, posters, or ads are usually better suited than flyers, brochures or fact sheets. Text-heavy translation workflows can also prove tricky since text lengths can differ depending on the language.

Publisher only modifies elements in the source document that have actually been changed. For example, if no changes are made to an element, the element in the original document remains untouched. This means that even if elements don’t look quite right in Publisher, they are still rendered correctly when downloaded – because, essentially, they haven’t been modified.

The most important considerations when designing or converting InDesign documents for Publisher use are listed below. Please know that, since the Publisher is always evolving, changes may occur to the list.

InDesign Version: We support InDesign CS4 (where IDML was introduced) or newer. 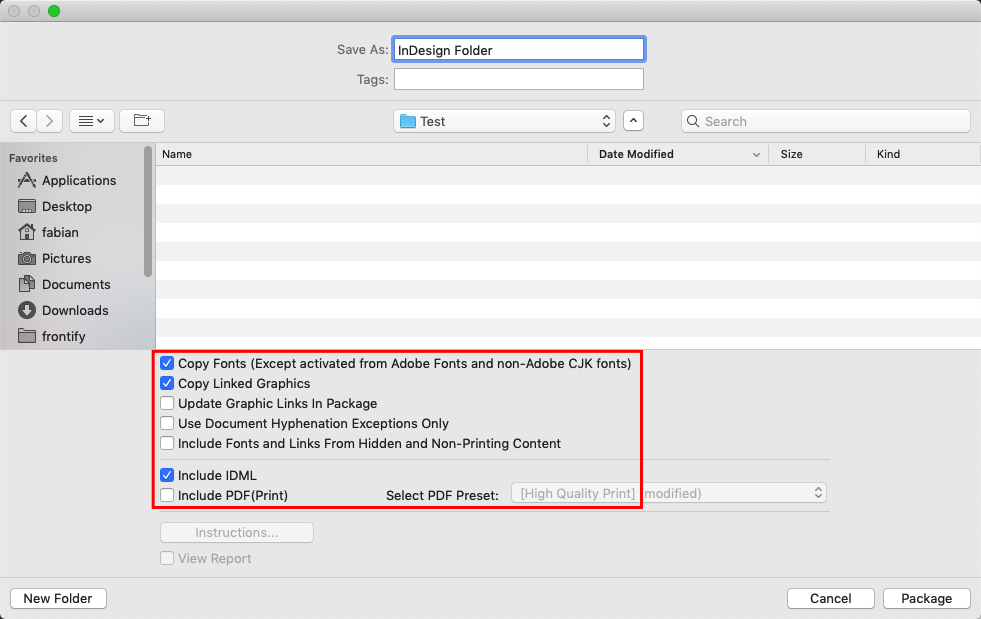 4. Create the package, and make a .zip file of the resulting folder (containing the .idml file, a Links, and a Document Fonts directory)

Such a zip archive must only contain one .idml file and the links and fonts folder, there cannot be multiple documents (.idml files) in one archive, even if the same links or fonts are shared.

Fonts: By completing the steps above, fonts are included in the package, and do not need to be manually installed on the server. The fonts need to be included in every package, not just one for the whole Frontify instance. Only TTF and OTF fonts are supported, other formats need to be converted before packaging. (E.g. postscript type 1 fonts are not supported.) Adobe Cloud fonts are not supported because of licensing restrictions: https://helpx.adobe.com/fonts/using/font-licensing.html#act-server. Make sure fonts are actually available and are not marked with square brackets, e.g. in the paragraph style settings.

Images: Do not rotate, mirror, or transform images if they should be replaceable by the consumer. Transformations will be kept when replacing images, which could leave the consumer confused if replacements are suddenly transformed.

Also, be sure to adapt the size and placement of the image to the frame, making sure that the image only is replaced. If the image is much larger than the frame, the customer will only see a part of the replacement image, which could leave the user feeling perplexed.

In the screenshot below, a preferable image positioning can be seen on the left – the image is the same size as the image frame. On the right, the image is much larger than the frame – as we are basically replacing the image in the orange frame, only a portion of the replaced image will be seen. The image size and placement should be aligned with the image frame, as suggested with the red arrows. 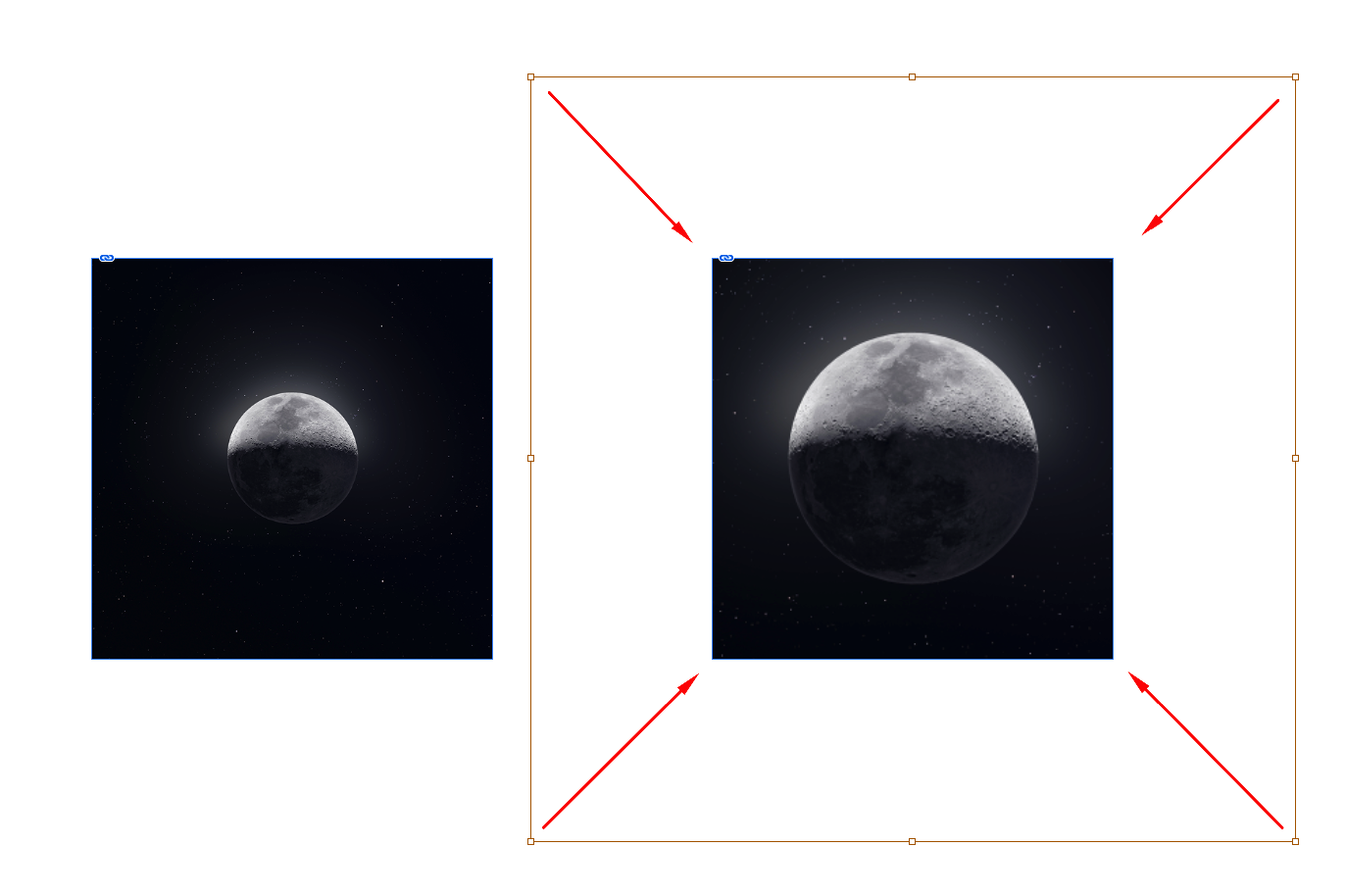 Embedded Illustrator, Photoshop or PDF files could be scaled incorrectly, depending on how they’re placed. (No general rule can be stated here.) Additionally, embedded images with applied options during the “Place…” operation (e.g., automatically cropping the background of PSD files or selecting a specific page) are not properly supported. Whenever possible, Illustrator or Photoshop files should be converted to PNGs to mitigate these issues.

Additionally, “Frame Fitting Options” are not supported, and using them could result in ill-positioned images - adapt the image size to the image frame as described above.

Embedded images (recognizable from the “embedded” icon in the Links palette) can’t be replaced - they will show up after the import, but the “Replace Image” functionality will fail to replace the images in the Download. The solution is to un-embed these images if they should be replaceable - for logos, etc. that shouldn't be replaceable, no action is required.

Image Placeholders: If you’d like to include image placeholders (empty image frames) without an actual image (but maybe an example color), make sure to use a Graphic Rectangle (set content type via “Right-click > Content > Graphic”). Any other elements won’t be recognized as image placeholders. 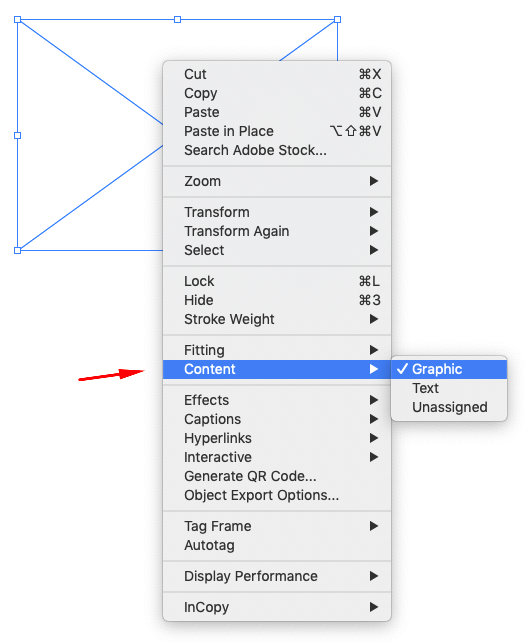 Text: Split different text styles or elements (e.g., title and subtitle) into separate text fields, so they can be unlocked, edited, and styled independently. Because of differences in text-rendering between the browser and InDesign, line-breaks might end up earlier or later in the text.

Try to keep text simple, and avoid multiple text stylings whenever possible. Some text styles, such as super-/subscript, certain margins or padding are not supported.

Text regions: Text flow over multiple elements or pages is not supported.

Tables: Tables are currently not supported.

Nested/Transformed elements: Elements with multiple transformations applied (e.g., rotation and scaling) may end up in the wrong position in Publisher. Especially mirrored and rotated elements (at the same time) are affected. Nesting may facilitate this behavior in certain situations. As a rule of thumb: try to keep your document as simple as possible, unnesting or ungrouping elements might help.

If you have any questions please don't hesitate to contact us.

Did this answer your question?